For this ring I deserve a monument. A life-sized one!


Hmm, well… considering my actual height (1.50 m on skates and in a hat), it should be “bigger than life”. Maybe double.


The customer was Elle, from Kauno in Lithuania – someone who is also creative and inventive.  And being from Lithuania, it’s inevitable that she would have good taste and style!


Those who work with custom-made jewelry know that from such clients you can get very interesting design requests. But the process of trying to agree on the final design can make you lose all patience.


I understand that process, since I’m an exacting customer myself. So when Elle contacted me, I stocked up on Extra Patience and sat down to look at her sketch.


She knew what she wanted. A gold ring, without stones, made from gold of three colors – white, yellow and rose. The sketches she sent were nicely done, and they were quite doable as far as manufacturing technique.


But none of them produced that feeling of “Wow…” or in the popular Hebrew slang, “Walla!” (That’s it exactly!)


That’s the reaction I aim for in all the ArtLeah designs. This was simply too ordinary, the kind of ring you could find somewhere already made… which would certainly be easier.


I started to draw my own sketches.

I somehow ended up with the same result. No “Walla”.


Besides, there was no logic in my designs. That’s a cardinal rule in jewelry creation, and after many years working in High Tech, I already had that rule firmly embedded in my thinking.


It was necessary to show off all three colors of gold. I couldn’t let the design be dominated by just one or two.
I received this order while preparing for our first “Unikity” exhibition with our partner Nikita, a young jeweler who expresses style without effort… and produces logical designs without thinking. I think she has that gift straight from God. So I consulted with Nikita about the challenge.
Designer Two


Nikita eyed the previous design attempts and said, “Let me try.”  The next day her sketch already was on my desk. 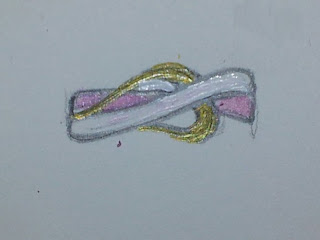 I liked it... and here was the logic I was looking for: an organic interplay of the three colors of gold, not one and not two but all three.
The client liked the design too. Well, 95 percent of it.
“Make it a little wider here, a bit narrow there, here just a little different...” wrote Elle.
So we revised the design, sent it back and got the go-ahead to make this one-of-a-kind ring. It seemed logical that Nikita would finish the creation since she designed it.
But....
Nikita does the whole creation process at once, which doesn’t allow for changes along the way. That’s a high risk for such an exacting client. What if Elle doesn’t like the final result?
I have gotten used to keeping the customer in the loop at all stages of design and manufacturing, which is made easier by global Internet connections. I decided it would be smarter to make a wax model from the sketch – it will give Elle a preview of the finished article before we invest the time and expensive materials to make it.
I gave the middle stage of this work to the other ArtLeah designer, Natalia, who knows how to accurately translate designs into wax models. Here’s what she made: 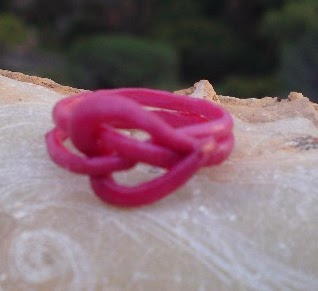 Elle’s response: “Well, okay, but... we need to increase here, cut away over there, flatten over here, push up a bit on that part….”
Natalia’s second version was what Elle had asked for, but now the design didn’t please me. Deadlock.... How to proceed?
Then I got a “brain storm” idea.
Designer Three
I wrote to Elle: “Make a model of your ring out of dense colored paper and wear it on a finger. That way you will see it in the right size and dimensions, in the real everyday environment – and it will make you more certain about you want.”
So that’s what she did. Except that one more time, the design changed. 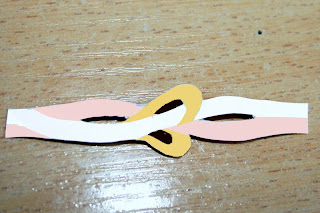 This time I decided to make the wax model myself. But instead of consulting with the client again… I took a bold step forward and made the ring in silver. I put a finish on it and sent a photo.
I explained that all the sizes were thickened in this copy and would be reduced; the gold ring would be less massive and more delicate.
Well, finally: “Walla!” It was approved without further remarks.
I continued. From the elastic band that had been used to create the silver ring, I made the final wax model. 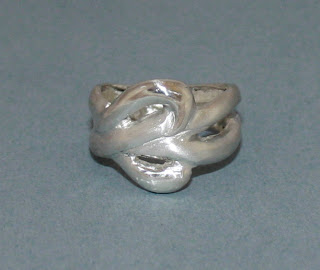 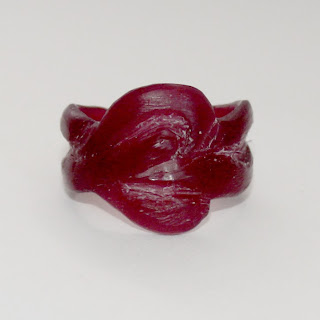 Then I dismantled the wax model’s three intertwined pieces and cast each one. Then, after developing these pieces into elastic bands, I made three separate wax models – one from each elastic band.
The three parts of the ring cast separately.

I finished each wax model, and handed it over to be cast in gold. 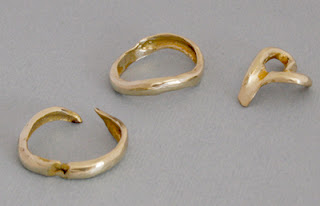 Well, then it was time to solder the interlocking pieces together, as the design intended. And THEN it was given a finishing process by my new assistant Alex, a professional jeweler.
Only three months had passed, and it was finished.
It was then that everyone saw its true beauty… and the story it told.
The design was a lovely work of art and logic, telling a romantic tale of life and love:


Two different roads, two different people.
Running parallel, missing each other, at last crossing paths. And in the end, one heart for two. 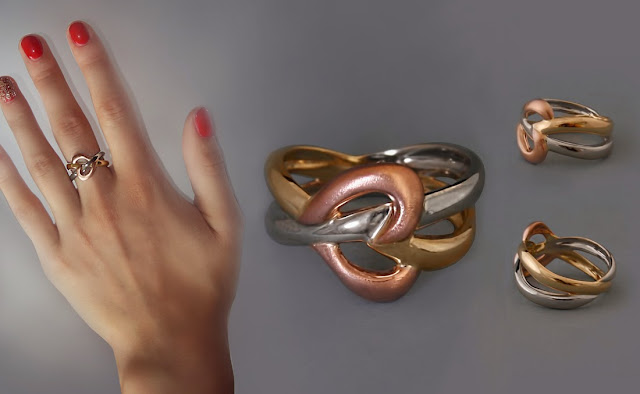