Beware of the Gold Rush! 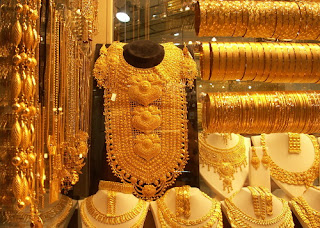 
Girlfriends of my wife bragged to her that they had bought gold jewelry in Turkey for amazingly low prices. Now my wife dreams of going to Turkey to cash in on the bonanza. Why does Turkey have such cheap gold compared to the rest of the world? Even gold jewelry set with gems is significantly cheaper there. With the price of gold being sky-high, how can they do that?


How indeed? A Russian TV program did some investigative reporting to find the answer.


There was also a “gold rush” developing in Russia, a market stampede for gold jewelry from Turkey. Russian jewelry experts used a Gold Karat Tester to confirm that the “hallmark” (the number of karats stamped) on the Turkish gold jewelry matched the amount of gold actually found in the piece. The results could be summed up as: “buyer beware!”


It appears that one can actually buy gold products in Turkey that contained the amount of gold they claimed to have… sometimes.  They were in small shops, where few foreigners are likely to find their way.  In the larger shops catering to tourists, the content of gold tended to be much lower than the hallmark, and sometimes the jewelry contained NO gold at all!


While most buyers would feel anger at having been cheated, one overly ambitious Russian lady had a reason to smile. She had carried home several kilograms of gold products from Turkey, apparently without declaring these treasures to Russian customs officials as required. She was detained and all her gold was confiscated… but several hours later, all the items were returned to her. It seems Russian officials had used the Karat Tester device and found that the lady had not violated the law; not one piece in her possession had any gold in it.


So how are these jewelry makers and dealers managing to fool so many people into thinking they are looking at a great gold bargain? Here are some possibilities:


(1) Someone cheated on the amount of gold in the product compared to the hallmark. If the stamp reads “14K” gold and the product is made of 12K or 10K, it’s impossible to tell the difference by looking at it. The color is preserved by the alloys (other metals which are always added to pure gold). Even after wearing it for some time, you won’t know the difference.


(2) Cheaper-than-usual alloys were used. For example, the 14K white gold which is fashionable today may contain nickel, which costs less than the palladium used in quality 14K white gold. It will look the same, but gold with nickel can cause allergic reactions in the wearer. In Israel, serious jewelers never use gold with nickel additives.


(3) The jewelry was stolen; or the gold was stolen, melted down and reused. This simple explanation is almost impossible to prove, but it’s a worldwide tradition to sell “hot” items for suspiciously low prices.


(4) A minimal amount of gold gives it the right look. The item could be gold-plated (covering copper or nickel with the precious metal), or made of vermeil (silver fused with gold by electrolysis - durable and legal, as long as it’s identified as vermeil). If the piece is made by a punching method, sometimes there is less than 1 gram of gold.


(5) In the most extreme case, it’s just gold-colored metal. Highly polished brass can be mistaken by inexperienced shoppers for gold.


With real gold jewelry, the prices are not arbitrary. A reputable jewelry manufacturer will charge for his products based on the world market, where two-thirds of all the available gold goes into the jewelry industry. Some gold suppliers set their price based on the “London gold fixing” (published twice a day), while others watch the “gold index” in the stock market (which goes up and down constantly). But gold prices are controlled mostly by “demand sentiment”, or what people think gold is worth at the moment. See the interesting articles at:
What the London fixers (and all other authorities) agree on is that gold keeps its value; it will always be a “precious” metal. So keep in mind that if the fantastic price on that gold item seems too good to be real, it (the gold) probably ISN’T real!