Jewelry Gifts You Can Forget About 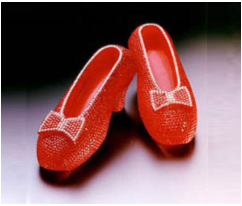 I’ve always thought gifts are easier to find by the process of elimination – if I know what I am definitely not going to buy, I can narrow down the options to a manageable list. So with the holiday season approaching for both Jews and Christians, I decided to share my method with the world.

I found some outrageous jewelry gift ideas that you can safely cross off your list. My requirements in my search were jewelry pieces that are (1) very, VERY expensive, (2) probably useless, and (3) only pretending to be art.  Here are my top choices for the Prize.

Third Place was actually a tie.  I couldn’t decide between an unreadable wristwatch buried under 201 carats of gems, and a pair of real ruby slippers which I suspect would rip up the feet of the wearer. In my opinion, both designers were on an ego trip rather than a journey of creative expression. You can decide which is more deserving of the Elimination Award. 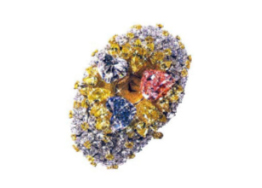 Left: Wristwatch by Chopard of Switzerland. The timepiece is almost hidden by 874 diamonds of different sizes and colors. The three large center diamonds are rigged to mechanically open up like flower petals… further obstructing the clock face.  Price: $25 million.

Right: Ruby Slippers by Harry Winston Jewelers (created on the 50th anniversary of the classic movie “The Wizard of Oz”). They are covered with 4600 rubies totaling 1350 carats, and trimmed with 50 carats of diamonds. Price: a trifling $3 million… but whose feet will fit them? And what would the diamonds do to her stockings??

Second Place goes to an invention coming out of India, which you have to see at close range to believe it. It’s “eye jewelry”.  No, not that charming line design above the eyebrows, or the glittering makeup – the jewelry is ON the eyes.

Below: Contact lenses embedded with gold and diamond chips.

Chandrashekhar Chawan, the eye doctor in India who designed them, says he was inspired by his wife’s diamond tooth to create “diamond eyes”. At first glance they are appealing… but a closer look reveals a thick button-eyed bulge over the whites of the eyes, which is unnatural and creepy. What do those white buttons do to the poor girl’s eyes underneath? Chawan claims they are functional soft lenses and “relatively safe” to wear, but he reports the market reaction as “mixed”, with more sensible consumers calling the idea “scary”. No kidding…. Besides the fear of slicing my eyes with an escaped diamond chip, such fat lenses could easily pop out or get ruined. At $15,000 a pair, that’s not funny. 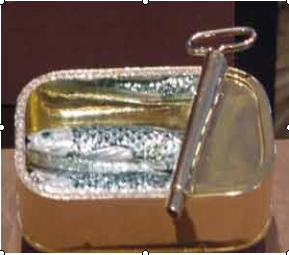 First Place is happily awarded to the “jewelry art” to your left: An exact copy of an open sardine can.

This has everything my Elimination Prize demands – crazily expensive, absolutely useless, and without a whiff of artistic creativity. The ugly details are copied right down to the peeling foil on the inside of the can, and the grainy scales on the fish. It’s so “real” it could be mistaken for kitchen garbage. But this object is made entirely from 14K gold, and the fish are studded with 55 Russian diamonds totaling 3 carats.

It’s a real steal at only $25,000. Fortunately it can’t tempt you, because it’s already been bought. This piece, designed by American jewelry maker Sidney Mobell, is on exhibit at the Smithsonian Museum in Washington DC, along with many other works by him.

Mobell has made his fortune by copying mass-produced junk as art objects for the very wealthy. Once an ordinary jewelry designer, he said that it was originally just “a gimmick to stay ahead of the competition” and get publicity for his shop. His first “gimmick” appeared in the 1960s: a solid gold Mickey Mouse watch that looked exactly like the real watches (which were cheap plastic). His wife and friends thought he was crazy. But Roy Disney, heir to the Disney industry that created Mickey, took a fancy to it. Then Charles Shultz, creator of the Charlie Brown comic strip, ordered a gold Charlie Brown watch. Encouraged, Mobell went on to create jewelry copies of garbage pails, toilet seats, baby pacifiers and other items produced in factories. In 1988, the makers of the classic Monopoly game commissioned Mobell to craft a jeweled replica of the game for a world tournament. It doesn’t qualify for my Prize, because you can actually play Monopoly with it. But it’s Outrageous for a mass-produced board game – 2 million dollars of gold and embedded gems. People pay to see it, but you can admire it here for free:
So now that we have eliminated some of the jewelry gifts we would never buy – even if we had the money – we can move on to more realistic ideas. Time to take a tour of artleah’s jewelry shop for some beautiful, wearable, affordable gifts for the holidays.