BIJOUTERIE: Jewelry that goes from Rags to Riches

You gotta love the French language. It can make the most ordinary object sound exclusive and expensive. When the fashion industry borrowed the word “bijouterie” (from bijoux, French for “jewels”), a whole category of jewelry was transformed from cheap trinkets into collectors’ treasures.

In a nutshell, “bijouterie” is the new name for what we used to call “costume jewelry”.

That’s right. The low-cost, glittery or glossy “wear for fun”
stuff at the local department store of the 1950s – as well as the beads and bangles found at the hippie shops of the 60s and 70s – have been promoted to the front row of trendiness in the 21st century. Classy pieces by Dior and other superstar designers are now landmarks in the bijouterie landscape, with price-tags as outrageous as the creations themselves. We might say they have set the “gold standard” for fake jewelry. 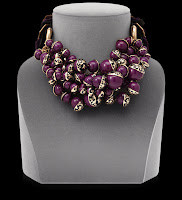 Even the word “fake” has gotten a facelift. Pearls that aren’t real are now “faux” (another French word), a term so glamorous that a triple string owned by Jackie Kennedy Onassis – wife of a billionaire – was auctioned off in 1996 for $211,500. (The auctioneers at Sotheby, still stuck in the 20th century, had estimated that these “imitation” pearls would fetch only around $700.)

So what characterizes this new-old jewelry trend? Based on a survey of the Internet, bijouterie can apparently be anything you want – literally. And this is where bijouterie parts ways with the costume jewelry of earlier generations. Whatever is decorative and intended for display on the body qualifies, as long as you leave out precious metals and gems. And even that restriction is debatable.

The materials can range from mass-produced colored beads and chains to natural organic seeds and rocks… combining metal with fabric, porcelain with seashells, plastic with wood, glass with feathers… your imagination is the only limit. The design might be polished, with intricately carved, gold-leafed and painted patterns; or naturally rough and unfinished.

The styles can be post-modern or classic, ethnic or vintage (from any era or culture you like), delicate or chunky, understated or wild.  But the main thing is to wear bunches of these creations together. 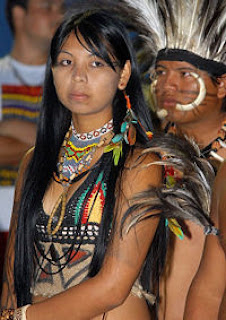 I guess that’s why the fashion industry had to find a new word: no existing style can really describe the end result.
[Above: Ethnic Bijouterie from - Four different pieces worn together around the neck and in the hair...not counting the bracelets! The "jewels" are natural aqai palm seeds, plastic beads and tropical bird feathers.]

Coco Chanel, the famous fashion designer for wealthy Europeans in the early 20th century, once said: “It’s disgusting to walk around with millions around the neck because one happens to be rich. I like fake jewelry...because it’s provocative.”

would have loved today’s bijouterie. Its real meaning is: Wear everything, and be totally provocative.

[Right: Bijouterie from – Enamel “zarukavya” beads, inspired by ancient bracelets made of gold, pearls, gems and thin gold chains.]
Posted by HannahW at 5:45 AM