Many of our jewelers are interested to know what jewelry is worn by Chinese men and women. Not the mass-produced jewelry made for export by their numerous factories for residents of Europe and the Western Hemisphere. Not the Western pieces sold by Tiffany and Cardan to the wealthy Chinese in the boutiques of the Forbidden City. We were looking for the kind of jewelry that average Chinese people would admire and want to own. 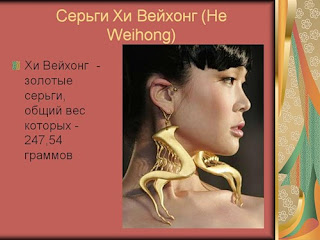 Gold earrings designed by He Weihong.
Weight 247.54 g
My research on the Internet did not yield any results. The English-speaking Chinese network is filled with offers for the average European. And of course I do not understand Mandarin characters.


Questions to a Chinese government official did not help much either.  Apparently an economist more than anything else, he supplied me with lots of numbers on the growth of the Chinese jewelry industry, but he could tell us nothing about Chinese design. 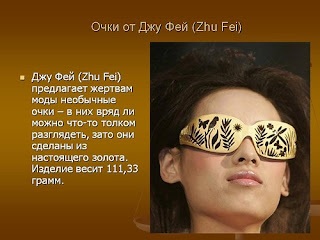 Photos from a fashion festival in Beijing (the Chinese capital).

Fine glasses,made of gold. Nothing can be seen, but it’s fun anyway!


The Chairman of the Jewelers Guild of Russia, Mr. Radashevich, told us at a seminar that with China’s entry into the WTO (World Trade Organization), the Chinese almost destroyed the entire jewelry business of Italy. They showed up in Italy, buying heavily from a whole range of jewelry items, which gave the Italians dreams of further profits from returning customers… but the dream became a nightmare! Within a short time, the Chinese flooded the world market with copies of all Italy’s best jewelry designs, at very low prices (no doubt part of those impressive growth numbers that the Chinese official sent us!). Unfortunately, there is no legislation in Italy to protect jewelry designers from copycats. 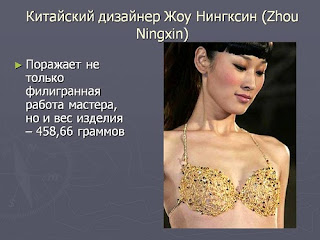 Somehow, we did manage to learn something about the Chinese people themselves. Their taste in jewelry favors pure gold, without precious stones. Colored stones are almost never used, with one exception: the favorite stone in China, which is called Nephrite Jade. (By the way, in Chinese poetry a man's male member, or penis, is often called a Nephrite core.) 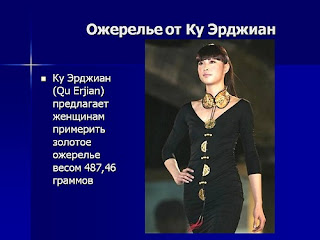