The history of jewelry has interested me since I started to make jewelry art. 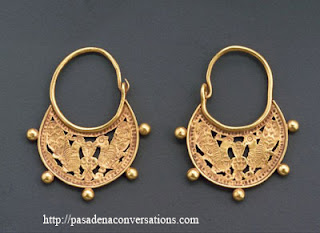 Recently, re-reading a Torah translation in Russian, I read that when Abraham sent his servant back to his native land to find a wife for his son Isaac, he sent him with some valuable gifts for the future bride. And when the servant met Rebecca (who became Isaac’s wife), he gave her gold bracelets weighing 10 shekels, and gold earrings weighing one-half a shekel. The weight of one shekel in those times was 14 grams. So each earring contained 7 grams of gold.

Bracelets in ancient times were used as a measurable kind of money; the girl received two that weighed 140 grams.
Who could carry such weight around on their wrists? But the earrings of half a shekel were something that Rebecca could easily wear. It's interesting that many centuries later, 7 grams became the standard maximum limit for earring weight in the USSR.
We can imagine how those ancient earrings might have been fashioned. Considering their moderate weight and the relatively high density of gold, they were not massive or bulky. They might, for example, look like…these ones, Masterpieces of Ancient Jewelry.

This earrings form is still in fashion today.
Here are  the earrings  "Magic Loop" of our designer Ester Dvoskin. 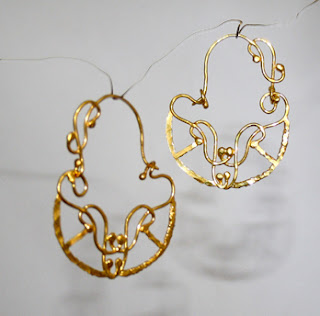 Some things are so right, it's impossible to improve on them, even after thousands of years.
Posted by Leah Gerber at 1:41 AM