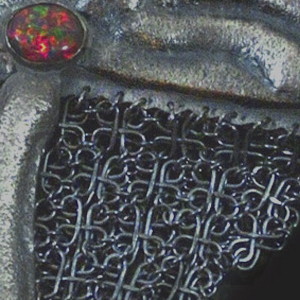 My hobby is to wander on the open spaces of the Internet in search of interesting jeweller designs. But I don’t meet really original work too often.

Once, in March 2007, I came across a jewelry artist's journal and I saw the prizewinners of competitions in 2006. There were amazing works! By amazing masters! I so much wanted to make something at the same level and participate in this competition.


From a financial standpoint it was quite possible, since entry fees were cheap.
Shortly before that, I had learned an ancient Argentinian technique of weaving with metallic wire (I later saw examples of this technique in Albert and Victoria's museum in London). In my teacher's gallery there was an assortment of small silver handbags, simple and not so interesting in design. But I liked the idea!
So, that settles it, I thought to myself. I'll create a handbag.