When is a Trinket a Talisman? 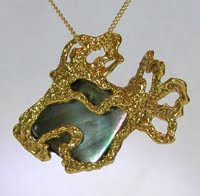 I came across a lecture on Egyptian jewelry art, by a Professor Jorge Angel Livraga Rizzi.
That's a very interesting name for an Egyptologist, and it was a very interesting lecture.
According to him, the ancients believed that jewelry had certain magic meaning, and in some way could protect us against spells, curses, disasters and even physical attacks. There was a time when all peoples believed in it. But the Egyptians (said the Professor) had a stronger than average conviction that pieces of jewelry were not just items of personal adornment; they connected with natural forces that helped the person who wore them.
That tradition (or superstition, depending on your viewpoint) has continued to this day in some cultures. Did those talisman pieces offer protection? Apparently not for the ancient Egyptians, whose empire crumbled and left the jewelry behind for other cultures to analyze....
But the symbolism embodied in much of the jewelry we wear today still makes it more than a trinket.